Alison Marie
I'm a twenty year old female living in Lincolnshire. You can normally find me with a cup of tea in one hand and my trusty BlackBerry in the other. I'm an honest blogger; you can rely on me!

I picked up three glitter liners at Boots yesterday, made by the 17 brand. They were 3 for the price of 2, which I think is an absolute bargain! How could I resist? 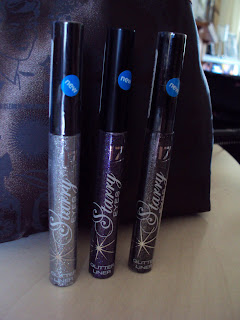 I decided to buy Moon Rock (Purple), Supernova (black), Northern Star (Silver). I'm hoping to pick up Stardust (Gold) at some point, too.

First of all, I wasn't convinced: it didn't show up very well. But I figure the trick is to go over it a couple of times. Below I have gone over my original line twice, so I reckon if I tried to build it up it'd look even better! 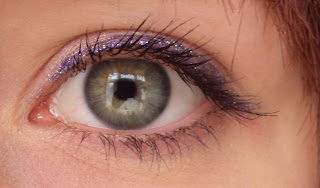 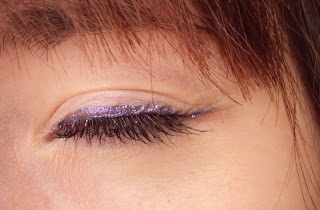 The brush is not that bad - it's easy enough to see what you're doing. Other eyeliners I have tried have really tiny brushes and it's impossible to create the look you want if you haven't had a lot of practise with the brush. This one however is pretty easy to get used to. It is both soft and firm so depending on what kind of look you want I'd say it was a good choice of liner to use, especially if you're a newbie to using a liner brush. It certainly takes some practise at getting the right sort of line but it shouldn't be too hard!

The thing I like most about these eyeliners ... it doesn't move! I smudged some of my mascara and was worried I'd end up smudging the glitter liner off, but it stays put. It is also easy to build up, although it does feel weird on your eyelids at first. I would say these are more suitable for the party/evening looks, but I can definitely see myself jazzing up my eyes with a bit of Supernova during the day.

I think I'll be experimenting with these for a while, and I will definitely be trying the Starry Eyes eyeshadows. It's lovely to find a glitter liner that is actually really cheap! At £3.99 (and it is currently 3 for the price of 2 at Boots right now) you'd be mad not to try them.

Available at the bargain price of £3.99 at Boots
Posted by Alison Marie at 03:55 No comments:

If you need to contact me, you can do so via twitter @allyalejandro or by e-mail at ally5172(at)hotmail(dot)com.

For more blogs, fun, and fashion, be sure to check out these other sites!
The Style BITE
The Style Rawr
Soap & Glory
Musings and Reviews
Lizzy's Lips
The Rockabilly Girl Next Door

"Time you enjoyed wasting is not wasted time"
- Bertrand Russell